The story of Wain and Naysmith centres on a line of highly capable lawyers spanning nine decades, an iconic Parsonage, the evolving social and economic dynamics of the Marlborough region, and of course rapid and disruptive technology changes in legal services.

The legal firm of Wain and Naysmith traces back to 1932, when George Spence returned home to practice law on his own account. He had previously been in partnership with Richard McCallum and C H Mills from 1912 until he left Blenheim in 1917.

Spence won national recognition for his for a lifetime of work with the Aero Club and the SPCA, and received an O.B.E. He retired in 1957.

Fergus Paterson joined Spence in practice in 1948. After Paterson became Crown Solicitor in 1961, he was joined by F W (Frank) Bremner and John Wain – the firm then called Paterson Bremner and Wain.

Paterson wrote the Marlborough chapter in the book Portrait of a Profession, The Centennial Book of the New Zealand Law Society (1969), recording the history of legal practice in Marlborough.

Frank Bremner left the practice when he was appointed a judge in one of the Pacific Islands. He later came back to New Zealand and was a District/Family Court Judge.

Forward to 1974, and the firm (now Wain and Drylie) purchased the historic Parsonage from the Methodist Church, and refurbished it into their law offices, Parsonage Chambers, where the firm has operated from ever since.

Parsonage Chambers has been a defining feature of the Wain Naysmith law firm, being an icon of Marlborough’s history prominently located on High Street. Visitors to the region stop and take photos, and clients of the firm often ask about the heritage of the ‘old house’.

John Drylie left the firm to study and then become a Presbyterian minister in Hokitika where he later retired. Drylie was also Mayor of Westland for two terms.

In 1981 John Wain was joined in partnership by Alan Naysmith, with the name changing to the now familiar Wain and Naysmith.

The years between the 1980s and the early 2000s in Marlborough were notable for the relatively rapid development of the wine industry. Land use changed from arid pastoral farming and horticulture to predominantly viticulture. This meant a lot of legal work in the area of land subdivision, sale and purchase, grape supply agreements, new businesses and financing arrangements.

Martyn Wilson joined the firm in 2006 and became a partner in 2008. Martyn spent the first twelve years of his career with New Zealand Police, was a detective in the CIB and the Armed Offenders Squad, before becoming a lawyer.

The firm’s first female partner, Audrey Seaton, joined the firm as a result of an amalgamation of her firm Townsend Seaton with Wain and Naysmith in 2011. Audrey and Martyn continue to head the firm today, leading it into the future.

Being a knowledge-industry, legal services world-wide have embraced modern technology, and this has been a big part of Wain & Naysmith’s story. Pioneers like George Spence operated using volumes of large law books, fountain pens and blotting paper. In those days, a type writer was modern technology.

Contrast that with the firm today, where the team has instant access to online reference material, and attend webinars for professional development.

Wain & Naysmith continues to embrace new technology to support their work, but also choose to honour the firm’s heritage, by lovingly maintaining the historic Parsonage and having some of the icons of the past on display. They even have a working type writer!

Chronology of the firm’s partners 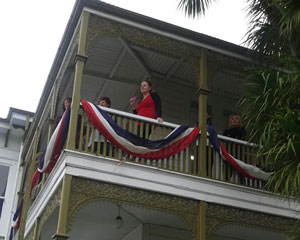 The visit in 2014 of royals William and Kate, was an opportunity to have some fun. Director Alan Naysmith discovered a package in the strong room labelled “royal visit 1953”. This package contained red, white and blue bunting, which Alan suspected was used by previous owners George Spence and Fergus Paterson to celebrate the royal visit to Blenheim in 1954. The staff marked the 2014 royal visit by draping the top balcony in the original bunting.